In this post we’ll be taking a look at the different ‘Types of Surfboard Noses and Tails’.

We’ll also be looking at the impacts of each surfboard nose and tail type. This should help to give a better idea of why each type is shaped the way it is.

It’s a quick read, so let’s get into it!

The first surfboard nose type we’re going to look at is the round nose.

The round nose type is the widest and most rounded nose type and can be found on foamies, mini mals and longboards. The extra width gives the surfboard lots of stability. This stability is one of the reasons it features so heavily in beginner surfboards.

The width also allows for lots of buoyancy. The buoyancy helps the surfboard sit on top of the water rather then within it, making paddling and catching waves really easy. 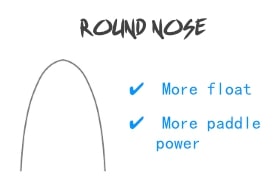 Longboards can feature a higher than usual amount of volume in the nose. This extra volume enables riders to perform certain tricks on the nose of their surfboards whilst riding a wave. These tricks can include putting five or ten toes over the very edge of the nose and are known as ‘hang fives’ or ‘hang tens’.

The second nose type is the round pointed nose. 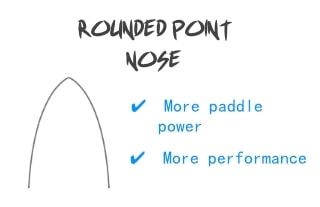 Although there is a reduction in volume, surfboards with this nose type still have good levels of stability and wave catching ability.

The final surfboard nose type is the pointed nose.

This nose type holds the least amount of volume and is typically found on shortboards and gun surfboards. This is the highest performance nose type and provides the most grip on a waves face with its’ sharper edges (rails). These sharper rails also make it possible to perform very quick and aggressive turns. This nose type is also the easiest to duck dive under oncoming waves. 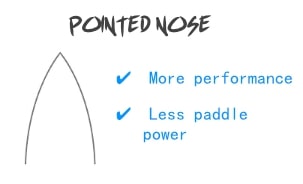 However, the small amount of volume means paddling is harder. But, surfboards with this nose type typically depend more on steep a drop-in to create speed.

So, starting with the round tail.

This tail type can not only be found on foamies, mini mals, longboards but also some funboards and hybrids. As the all-rounder of the tail types, the round tail performs well in a variety of conditions. This makes it ideal for beginner surfboards that will get used no matter the conditions.

One of the impacts of different surfboard tail types is the amount speed and manoeuvrability possible when turning. Expect smoother, more stable turns with the round tail type, great for beginners. The large amount of volume and width keeps the surfboard above the water making it easy to paddle.

Next two tail types are swallow tail and fish tail.

Now, these two are pretty similar with both having triangular like wedges cut out of the bottom – but they’re slightly different.

The big difference from the other tail shapes is the additional pivot point. This gives the manoeuvrability to perform very sharp turns and cut backs in either direction. Swallow and fish tail surfboards are also very wide just before the tail. This therefore gives great stability, control and hold when transitioning from one rail to the other.

Swallow and fish tails are great for those smaller, mushier conditions. This is why these tail types are so popular in the UK as we get those conditions a lot.

The next two tail types are the rounded square and the squash tails.

Both of these have very similar features and both are direct descendants to the first ever tail type – the square tail. However, we’ve not discussed the original tail type as it’s not really used in modern day surfing.

Both of these surfboard tail types offer a great balance between stability, manoeuvrability and hold. With the fairly large surface areas both hold a good amount of volume meaning they can glide into waves easily.

The slight differences are in the width at the very end of the tails and the sharpness of the corners. The rounded square offers a more compact turning ability whilst the squash offers more hold on the face of a wave. These are both high performance designs so perform best in the more hollow, picturesque conditions.

Last but not least is the pin tail type.

This surfboard tail type is only really reserved for the gun surfboards. It’s the narrowest of all the tail types and is designed to provide maximum speed and control on the most powerful waves.

The reduction in volume allows for more of the back of the board to sink into the water. This gives the rider the traction they need to stay in control on the bigger waves. Because there is such a small amount of surface area and volume with this tail type, it doesn’t perform well in small or mushy conditions.

Well guys those are the main ‘Types of surfboard Noses and Tails’ and their impacts. I hope you found it useful and has given you a better understanding of why a surfboard has what it has at each end.

Next read: ‘Types of Surfboards’

Best Foods To Eat Before & After Surfing