Surfboard fins and ‘Types of Surfboard Fin Setups’ can all be quite confusing when you first start surfing. In reality, they’re really easy to understand.

In this article we’ll be looking at the six types of surfboard fin setups. We’ll also look at the benefits of each fin setup, as well as which surfboard is used for each fin setup. Here’s a quick rundown of the content…

It’s an easy read so lets get started!

Starting with the OG, the single fin.

Created by none other then Tom Blake almost 100 years ago, this traditional fin setup now only really gets used on modern day longboards. 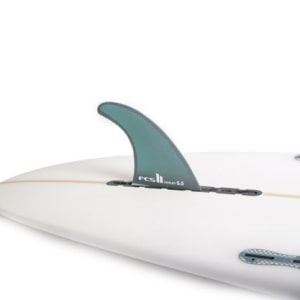 It’s purpose is to provide great straight line speed and the ability to perform controlled, elegant turns. With only one fin under the board there’s less stuff to get in the way of the water, meaning very little drag.

The single fin setup is therefore useful in smaller surf but it requires a bit more paddling to get up to speed.

Giving the surfboard a bit more of everything is the twin fin setup.

Pioneered by Bob Simmons and his Spoon, the twin fin setup is most commonly found on fish surfboards.

When surfboards began to get shorter, surfers found it harder to generate speed by paddling. This is where the twin fin setup comes in. With great hydrodynamics and the ability to manoeuvre quickly, surfers were able to create their own speed. 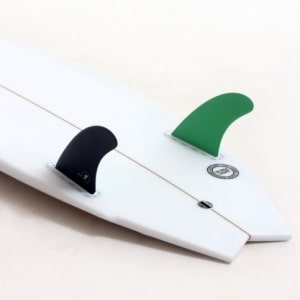 However, this setup is not without its faults. Although it holds a better line across the face of a wave compared to a single fin setup, it’s still not the setup for big hollow waves. In today’s hollow wave world, two fins just don’t offer the traction needed to stop surfboards sliding out beneath surfers.

Onto the most popular surfboard fin setup used today, the thruster.

This fin setup was created in 1981 by Simon Anderson to solve one of his own surfing problems.

Anderson noticed that his twin fin surfboard kept sliding out from beneath him in bigger conditions. After a frustrating session between the breakers, he noticed a friend using a single fin with two much smaller fins alongside it. He then decided to try three regular sized fins in a similar setup to his friend and so the thruster was born. 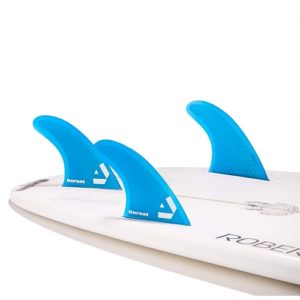 Andersons’ thruster became an instant success winning him three tour events in 1981. Since then his thruster has gone on to become the most common fin setup used today. With its perfect combination of manoeuvrability, line holding capabilities and speed, its easy to see why.

If you’re unsure about which surfboard fin setup to use, use the thruster. Check out the awesome thruster fin collection in the store.

Closer to the single fin setup than the thruster setup we have the three fin, 2+1 setup.

The 2+1 fin setup was designed to give longboards more stability on steeper waves. The setup utilises two small tracking fins either side of the larger central fin. Surfboards using this setup are able to generate the speed of a single fin setup whilst improving overall traction on bigger waves. 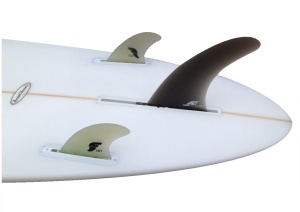 With this fin setup turns are more controlled compared to using a single fin setup, which can help beginners when they’re first starting out. This can be seen as a winter alternative to the single fin as it helps to control those bigger winter swells.

Now, onto the setup built for speed – the quad fin setup.

The setup design has been attributed to both Glenn ‘Mr X’ Winton and Pete ‘The Friar’ Ware, so it’s hard to tell who came up with it first. What we do know is it was developed in the 1980’s. 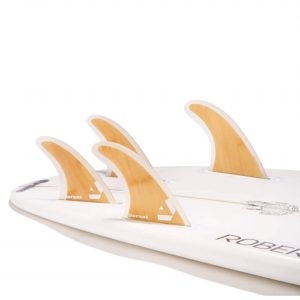 The quad fin setup creates speed on those smaller days. With the manoeuvrability of a twin fin and the line holding capabilities of a thruster, the quad setup quickly rose to fame.

If you’re after speed and power turns this is the setup you’re after. Check out the awesome quad fin collection in the store.

Last but not least is our final fin setup, the bonzer 5 fin.

The design was developed in 1983 by the the Campbell brothers and later drip fed into the market in the early 1990’s. 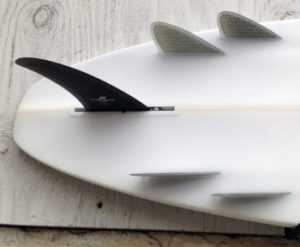 The bonzer 5 fin setup has the characteristics of a single fin surfboard with additional stability in bigger conditions. The tracking fins give the board the extra stability but take away from the single fins turning ease. It’s easier to ride steeper waves but gives a more rigid feel than a single fin or even a 2+1 setup.

Check out the awesome bonzer 5 fin collection in the store.

So guys there you have it, those were all the different types of surfboard fin setups currently used today. Understandably confusing at first, but when you take a closer look it’s fairly simple stuff.

If you’re a beginner and are still unsure, the thruster setup is the all round good egg. Don’t feel like you need to stick to one surfboard fin setup either. If you have the fins available – change it up. Try out some of the other setups and see which ones suit your style best.

Next read: ‘Types of Surfboard Noses and Tails’