So, we’ve journeyed through ‘The History of Surfing’ and ‘The Evolution of the Surfboard’ now its time for ‘The Wetsuit Story’.

In this post we’ll be exploring how the wetsuit was first created, as well as all the key players who contributed to its success. We’ll then take a look at the design improvements over the years to bring us the wetsuit we use today.

It’s a great little story, so lets get started!

The first to be honoured ‘The Father of the Wetsuit’ was a man called Hugh Bradner.

Bradner was an American physicist who worked at the University of California, Berkeley from 1946 until 1961. He was the first to work on a solution that would keep divers warm underwater for long periods of time. 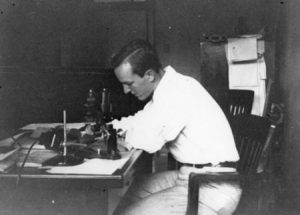 As part of his job at the university, Bradner was required to take part in underwater dives for research purposes. These dives allowed him to work closely with combat divers from the U.S. Navy. Both his own desire to complete his research and his working relationship with the U.S. Navy eventually lead to the most important question…

‘How does one stay warm in cold water for long periods of time?’

The hypothesis was simple; ‘You don’t have to stay dry to stay warm’.

It was Bradners’ understanding that both of these parts together could make a suit capable of keeping a diver warm for long periods of time.

With his hypothesis in place, the next obstacle was to find a material capable of proving it.

Bradner experimented with a number of foam plastics to prove his hypothesis but the unicellular element proved difficult. This was until ‘Rubatex’ was suggested to him by Willard Bascom in 1951.

Rubatex happened to be neoprene in its earliest form. The material was unicellular and flexible enough so Bradner used it to create his first wetsuit design. These first designs had a thickness ranging from 1.5-6mm and even included zips to minimise the flushing of water. 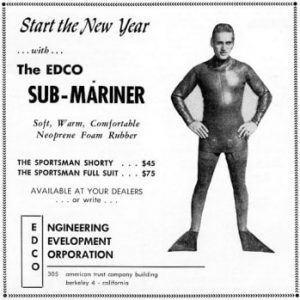 After perfecting his design Bradner supplied a small number of wetsuits to his diving comrades in the U.S. Navy. This was effectively the launch of his wetsuit company; Engineering Development Corporation (EDCO).

Unfortunately, Bradner and EDCO couldn’t penetrate the market as two other pioneer wetsuit manufacturers had already taken the lions share…

So, who were the two wetsuit manufacturers who took the majority of the wetsuit market so quickly?

Well, the first and perhaps more well known brand out of the two was the O’Neill brand.

Pioneered by Jack O’Neill in 1952, the wetsuit brand was first developed in his garage in San Francisco. Originally, Jack worked as a surfboard shaper but soon branched out into making neoprene vests.

The vests started selling better then the surfboards and he quickly developed a handful of designs; ‘The Shorty’, ‘The Long John’ and the famous ‘Beaver Tail Jacket’. 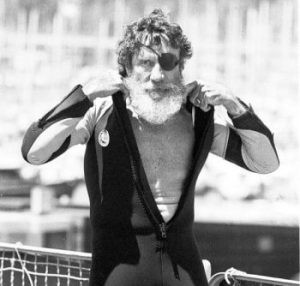 Over the years, the O’Neill brand of wetsuits grew in popularity along with Jacks’ legendary status within the surfing community. His iconic eyepatch added the perfect amount of sea captain ruggedness to the O’Neill brand.

Jack was branded ‘The Father of the Modern Day Wetsuit’, so not to be confused with his predecessor Bradner. He was also inducted into the ‘Surfer’s Hall of Fame’ in 2003.

The second wetsuit manufacturer to have taken a large share of the market during the early 1950’s was Body Glove.

The brand was launched in 1953 by two twin brothers Bill and Bob Meistrell also known as ‘The Meistrell Brothers’. With a keen interest in diving they realised their community could benefit from neoprene so set out to create their own neoprene suits.

However, before the Body Glove brand was launched ‘The Meistrell Brothers’ failed with an initial launch under the name ‘Thermocline’. Legend has it, their friend Duke simply asked; ‘Whats so good about your suit?’…to which Bill responded; ‘Well, it fits like a glove’ and the name Body Glove stuck. 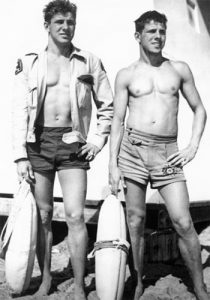 Body Glove went onto create the first wetsuit without zips and the brand is still available today. ‘The Meistrell Brothers’ even received a granite stone on the ‘Surfing Walk of Fame’ in 2007 for their efforts.

Now we know how the wetsuit story began and who was involved, we’ll take a look at the design iterations the wetsuit went through.

So, the very first wetsuit designs only ever featured a single layer of neoprene.

These single layers of neoprene were extremely fragile. So fragile in fact that they often ripped when getting them on and off. To combat the fragility surfers would use talcum powder to reduce the stickiness of the neoprene. 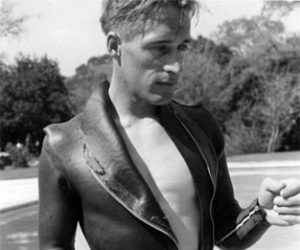 The other drawback to the single layer neoprene was the method used to stitch the panels together.

This method was called open hole stitching. Unfortunately, this method created fairly substantial holes in the neoprene. This obviously meant water could pass in and out of the wetsuit, making it hard to retain any warmth. These open hole stitches also didn’t help with the fragility issue as rips would often start at the seams.

But, it wasn’t long before improvements were made…

The first major improvement in the wetsuit story came in the form of nylon.

Nylon was introduced to tackle the fragility issues the early designs had. By using nylon as the in-between layer between the neoprene and the skin, the stickiness of the neoprene was hugely reduced. This addition made getting the wetsuits on and off much easier, so no more talcum powder needed.

Up until this point, all wetsuits were oil-based. Petroleum and other petro-chemicals were standard ingredients in the wetsuit manufacturing recipe.

However, in the 1960’s a Japanese company called ‘Yamamoto Corporation’ pioneered a new wetsuit material. Instead of being oil-based, this material was manufactured from the calcium carbonate within limestone.

The new material was called ‘Yamamoto Neoprene’, also known as Geoprene and is still used in premium wetsuits today. 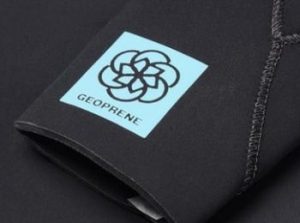 It was discovered that Geoprene had all the properties of the oil-based neoprene but was far superior in its performance.

Despite the impressive attributes, Geoprene only started making an appearance in the early 2000’s. Nowadays, Geoprene is reserved for the highest spec wetsuits in a brands range.

The 1970’s brought us another important advancement in the wetsuit story – double lined neoprene.

This outer layer of nylon opened the door for more colourful wetsuit designs. This was represented best in the 1980’s when a certain neon craze took over the world. 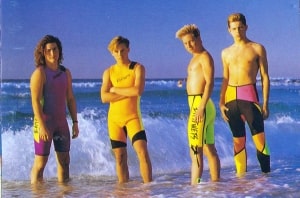 With a new outer layer of nylon came a more advanced method of stitching; blind stitching.

This new technique allowed panels to be sewn together without punching holes all the way through each layer. This was achieved by using a curved needle to stitch instead of a straight one. The curved needle would penetrate just under the outer layer and come back out the same side as it entered.

This resulted in less water flushing and a warmer wetsuit overall. 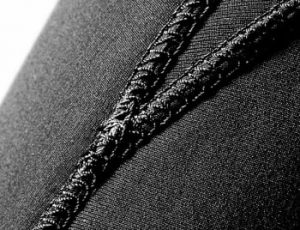 Liquid seams were also pioneered during this time and helped to make wetsuits more watertight then ever before. The ability of liquid seams to fill any possible gaps in-between neoprene panels makes them a vital part of wetsuit evolution.

The combination of blind stitching and liquid seams is the primary technique used when sewing the highest spec wetsuits today.

The only major technological advancement left to discuss is the first heated wetsuit.

In the early 2000’s, Australian brand Rip Curl developed the H-Bomb. It was the world’s first heated wetsuit and worked by conducting electricity through elements that mapped the back of the wetsuit.

Two lithium-ion batteries could power the suit for around two hours and changing the heat was as easy as flipping a switch. 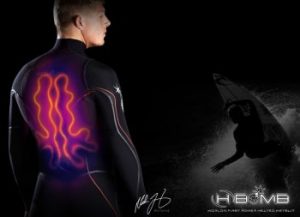 Unfortunately, with such high tech used to create the H-Bomb it was well out of the price range of most surfers. Rip Curl did create cheaper heated vests which were more versatile, but these also struggled to take off.

The Future Of The Wetsuit

We’ve almost come to the end of the wetsuit story – but what next for the wetsuit?

The biggest challenge currently facing wetsuit manufacturers and the surfing industry as a whole – is to become more environmentally aware.

Companies like Patagonia, Soöruz and Vissla are pioneering new wetsuits made in a sustainable way. These wetsuits are either made from naturally occurring rubber or recycled materials like plastic bottles and car tyres. 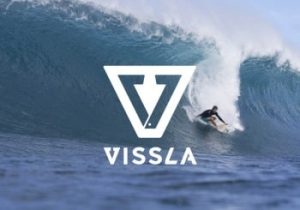 This attitude change is what is needed in the wetsuit industry to make surfing more sustainable. However, until the big brands agree to this shift in thinking they will continue to make less sustainable wetsuits.

That my surfing amigos is ‘The Wetsuit Story’.

I hope you found it an interesting read and maybe even gave you some takeaways on your next wetsuit.

It would be awesome to know what you think about wetsuit sustainable in the comments. Don’t forget to follow on the usual socials below to keep up to date with the latest surfing content!