Whether you agreed with it or not, surfing made it’s official Olympic debut at the Tokyo 2020 Olympic Games. So, to help all of you (and me) understand how it all worked… I put together this post so all the facts are one place.

Let’s get into it!

Now, the below timeline does not in any way do justice to the huge amount of work done to get surfing at the Tokyo 2020 Olympics. But, it does give a quick overview of the key moments that made it happen…

It’s definitely who you know and not what you know. This was a dream of Fernando Aguerre’s for over 25 years and he made it a reality. His next task will be maintaining surfing’s status as an Olympic sport for future Olympic Games.

2. What was the qualification process?

Now, the qualification process was a lengthy affair with 2020 being a complete right-off. It’s also a bit complicated so feel free to skip this bit if you want.

Here were the rules to a successful qualification…only two surfers per gender per National Olympic Committee (NOC) are allowed to qualify. All qualifications are earned on an individual basis and surfers had to have participated in both the 2019 and 2021 ISA World Surfing Games.

The IOC guidelines used a hierarchical order to determine each competitors successful qualification. Let’s explain this with an example, if a surfer qualifies via their final place in the 2019 WSL Championship Tour (which has Priority 1 status in the hierarchical order shown below), that surfer cannot then qualify again via any following events from Priority 2-5.

To help you visualise, here is a brief timeline to give you an idea of when all this happened.

3. Where did it take place?

The event took place at Tsurigasaki Beach also known as Shidashita Beach. The beach is located on the South East coast of the nearby region Chiba. It’s around 50 miles outside of Toyko so was certainly one of the more remote sporting venues.

There was some speculation an artificial wave pool could be used for the venue. This would have guaranteed waves and meant that each competitor got the same wave, but the IOC decided against it. 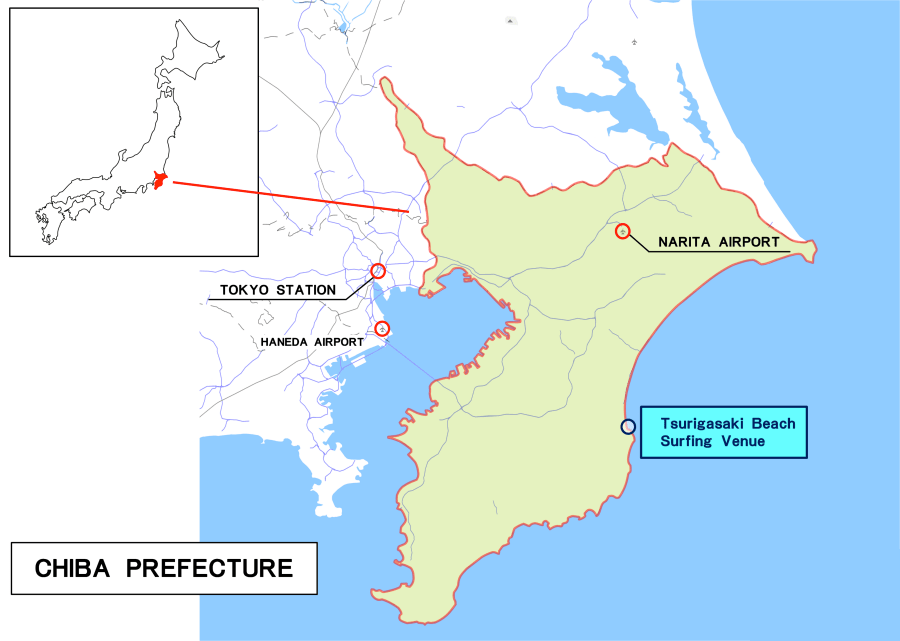 4. What were the competition rules?

Surfing at the Tokyo 2020 Olympics adopted the same four-person heat method used throughout the competitive surfing world. For the Olympics this method consisted of four athletes competing at a time. Out of these four, only the best two will proceed to the next round.

The length of the heats lasted between 20-30 minutes. In World Surfing League (WSL) competitions, if no one catches a wave during the first 10 minutes of a heat, the judges have the power to restart the heat – but this is wsan’t the case in the Olympics. Only the two best rides from each competitor will count. The winners were determined by a panel of judges.

6. How was the event scored?

The scoring was based on both the type and difficulty of manoeuvres performed. However, speed, power and the general flow of each move was also taken into account.

The highest scores were scored on bigger waves. The competitors needed to provide variety and innovation to score well. There was certainly a focus of quality over quantity in this area. The scoring criteria used the following quality levels as a guideline;

Using this quality level structure, surfers could have achieved a perfect 20/20 from their best two waves. Scores of 20 are rare and unfortunately we didn’t see any in this Olympics due to some fairly poor conditions.

Here is the full least of competitors alongside their current WSL rank (if they have one).

8. What was the event schedule?

The competition took place between the 24th of July and the 26th July 2021. Here’s a full breakdown of the event schedule with UK times (GMT+1).

First two competitors qualify for Round 3, bottom two qualifiers have to surf again in Round 2.

First three competitors qualify for Round 3, bottom two qualifiers are knocked out.

First competitor from each heat qualifies for the quarter-finals, bottom qualifier is knocked out.

First competitor from each heat qualifies for the semi-finals, bottom qualifier is knocked out.

Here are the final results, the medallists for the first ever Men’s and Women’s surfing competition at the Olympics.

UK residents can still catch up on the events that unfolded during the Olympic surfing using Discovery+.

This is now the only method to rewatch the historic events tha unfolded on Tsurigasaki beach.

Occasionally Discovery+ offer free trials to new customers on their Entertainment & Sports package. This is the package that streamed the Olympic surfing coverage live and will store highlights and full replays for a whole year (until 8th August 2022) now the Olympics has finished.

Signing up follows a standard customer journey similar to all the other free trials out there. The key thing to remember is to cancel the subscription before the free trial ends if you don’t want to get charged.

Now, we can’t go this far without talking about the divide surfing at the Tokyo 2020 Olympics has caused within the wider surfing community.

On the one hand; surfing at the Olympics was viewed as a good thing. Exposing surfers at the top of their game showed the world how surfing has progressed. Some of the people in this camp would probably have no problem calling surfing a sport.

On the other hand, surfing to some is a pastime – it can’t and shouldn’t be bound by competitions, rules and regulations. For many surfers (including myself), surfing is an escape that helps us literally and metaphorically get away from it all. I’d say this community would have no problem calling surfing a hobby.

I didn’t start surfing because I followed a sport, I started surfing because it was fun and I enjoyed being in the sea. But, all that being said – I tuned in for a number of the heats during the event and found it super interesting. I think I still view surfing as a hobby and pastime but now have a greater appreciation for those doing it at the highest level.

So that’s it guys, hopefully this post helped you through ‘Surfing at the Tokyo 2020 Olympics’ and enjoyed its Olympic debut.

Let me know in the comments below if you watched any of the event yourself and what you thought of the whole thing. Also, feel free to vent your frustrations if you don’t think it should even be in the Olympics – be great to get both sides of the argument.

Next read: ‘How To Remove Surfboard Wax’